Cornerstone plus vs roundup

There are different ways and methods to control weeds in your yard. Using a weed killer is one of the most effective ways to do that. In this article, we will discuss two popular weed killers: Cornerstone Plus and Roundup.

Cornerstone Plus and Roundup are generic glyphosate weed killers with the same active ingredient. Both contain glyphosate, a non-selective weed killer that kills all weed species it comes into contact with.

Cornerstone Plus can be used as a Roundup alternative if appropriately diluted and blended. Cornerstone Plus also could be an option due to Roundup due to its lower pricing.

Let’s take a look at the two weed killers listed above to help you decide between the two.

Cornerstone plus vs roundup: Ingredients

Roundup is, in essence, more ready-to-use than Cornerstone Plus. Both, however, have the same ability to reduce weeds and grasses in your yard.

Cornerstone plus is a flexible, broad-spectrum weed control tool. It’s a postemergent, nonselective herbicide that is absorbed through annual and perennial grass and broadleaf weeds.

Roundup is a non-selective herbicide that is generally believed to be safe for the environment, food sources, and animal life. It has the same active ingredient as Cornerstone Plus – glyphosate, which kills all common weeds. Although glyphosate is an acid, it is delivered in Roundup as its potassium salt. 5.5 lbs. per gallon is the amount in the solution.

The glyphosate inhibits EPSP synthase, a major enzyme required by plants to produce amino acids, which are a vital component of their cells. Weeds and grasses die when they stop synthesizing amino acids. It is a generic glyphosate.

Because this herbicide only penetrates foliar structures like leaves and not woody stems or trunks, it’s safe to spray around trees. Glyphosate degrades fast into naturally occurring carbon dioxide and nitrogen, making it completely harmless.

Roundup is a widely used weed killer because of its ready-to-use formula. After taking a look at a Roundup product label you’ll find out that, unlike Cornerstone Plus, it has other ingredients besides the generic glyphosate weed killer it has pelargonic acid, diquat and imazapic in its formula. All of these ingredients help Roundup kill more weeds faster, compared to Cornerstone Plus.

Pelargonic acid is a type of amino acid that enhances spray control and foliar penetration. It is a fatty acid that improves product adhesion and helps the weed killer penetrate through the cellular structure of the leaves.

Diquat works in a similar way to pelargonic acid in that it enhances foliar cellular penetration. It’s present in Roundup’s concentrated form and is effective against weeds with waxy leaves, such as ivy. The chemical tears down the cell membrane of the leaf, allowing the glyphosate to penetrate more quickly. This product must be blended properly, with special attention paid to following the directions and avoiding overspray on delicate plants.

Imazapic is the component that helps Roundup to control weeds for up to four months. After rain and irrigation, imazapic remains in the sprayed area. For the next four months, don’t plant anything in the area because the weed killer would still be active.

Cornerstone plus vs roundup: how long does it take to kill weeds?

Roundup and Cornerstone Plus both include glyphosate, which takes 7–14 days to completely eliminate all common weeds. But Roundup may produce some results faster (yellowing, wilting plants) than Cornerstone Plus due to its additional ingredients.

Because the two products use the same active ingredient, this is virtually a tie. If you’re thinking about switching to Cornerstone Plus, this could be a great argument.

Cornerstone Plus vs Roundup: Effectiveness

Over 100 types of weeds and grasses have been proved to be killed by Roundup and Cornerstone Plus. Unless you’re spraying it on a specially developed Roundup-resistant crop, such as some varieties of soybeans, the glyphosate weed killer in both of these products is non-selective, meaning it can kill all weed species it comes into contact with.

Cornerstone Plus vs Roundup: Price

Cornerstone Plus is a much less expensive alternative to Roundup. Since it has a less complicated composition its price is lower than for the Roundup. However, it also means that you might need to mix your Cornerstone Plus with additional ingredients before using it.

Cornerstone Plus: pros and cons

The 2.5 gallon Cornerstone Plus Non-Selective Herbicide kills over 100 annual and perennial weeds. This weed killer will kill weeds as well as other forms of flora such as plants, and shrubs.

It is a concentrated substance that contains the active ingredient: glyphosate. This weed killer travels down to the root and kills weeds and other vegetation after it is applied to them. It’s also good for cropping and preparing canola, corn, cotton, and soybeans.

Aside from cropping, it can be utilized in household settings such as walkways, roads, fences, and plant and flower gardens. It is not recommended for use on lawns since it can harm grass.

The disadvantage is that the concentrate is harmful because it contains surfactants. After consuming it, people have ended up in the emergency room or have died. 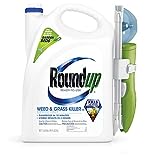 How to use Cornerstone Plus as Roundup replacement

If you’re looking to replace Roundup using Cornerstone Plus in order to save money while achieving the same results in weed control it is essential to do these things:

If you follow these two steps, you can utilize Cornerstone Plus to create an inexpensive product that has the same power to kill weeds as the commercial Roundup.

How much Cornerstone Plus per gallon of water do you need?

To achieve a 22 percentage glyphosate solution in your weed killer, which is the proportion of ready-to-spray Roundup products, mix 6.5 grams of Cornerstone Plus in 1 gallon of water. This is easily done with the sprayer. For the best results you should include the Cornerstone Plus and any surfactants to the sprayer in the beginning, followed by water.

Make use of undiluted Cornerstone Plus for applications such as eliminating stumps from trees.

Conclusion: Cornerstone Plus could easily be used a Roundup replacement

Cornerstone Plus is a fantastic weed killer that isn’t as toxic as Roundup. The key argument is that it may destroy weeds as effectively as Roundup at a cheaper cost. Glyphosate is the active ingredient in both Cornerstone Plus and Roundup, which means they have a similar ability to kill the same plant species with the same speed and efficiency. But since Roundup has surfactants in its ingredients list, it could be faster at killing weeds than Cornerstone Plus. Cornerstone Plus must be adequately diluted and blended with a non-ionic surfactant in order to equal Roundup’s effectiveness.

When to apply crabgrass preventer before or after rain